Fast, simple, and free! Ditch the fees and protect your margins with the online ordering platform built for restaurant operators.

The State of Women in the Restaurant Industry (2022)

The relationship between women and food is deeply rooted throughout history. Women were the gatherers of nomadic groups, holding the knowledge of what was edible and where to find it. Women have traditionally held the role of the head chef in a household; but too often, this title does not extend beyond the home kitchen.

When it comes to the restaurant and foodservice industry, women represent half the workforce,  but don’t always get the recognition and support they deserve. For too long, the foodservice industry has struggled to close the gender inequality that often occurs at top positions.

Why is this so? According to Dominique Crenn, French chef and owner of Atelier Crenn, lack of media coverage, access to capital, and access to affordable accessible childcare are just a few reasons. Aggressive and misogynistic behavior is, unfortunately, a common occurrence in the often male-dominated back-of-house.

Culinary trail blazers like M.F.K Fisher, Buwei Yang Chao, Julia Childs, Ruth Fertel proved that women were capable of doing everything men could do (and more) in the 20th century. In the 21st century, modern-day revolutionaries like Pinky Cole, Nina Compton, Christina Tosi, and Cat Cora continue to push forward and show what is possible for women.

Even though progress has been made with glaring gender inequality issues, looking at statistics in regards to women in the restaurant industry can be disheartening. Thankfully, in recent years, there has been a societal shift to pay more attention to how “things are and always have been” in the food industry. Through certain organizations, resources, change-makers, and societal pressure, the restaurant industry is shaping up to be a safer and more inclusive space for women.

Although taking a look at facts and statistics of women in the restaurant can feel discouraging and dispiriting, it is important to look at these metrics for the sake of moving forward and doing better. Gender inequalities and misogyny may be less blatant in the 21st century, but statistics like the ones below give an accurate portrayal of where we are at in terms of progress. Knowing and understanding these statistics is the first step in improving the careers and lives of women in the restaurant industry.

Half of the students at the Culinary Institute of America are female.

Women and men are nearly equal in terms of attending the Culinary Institute of America, with approximately 48 percent of students identifying as women. Why is this statistic important? This shows that women are indeed committed to pursuing a culinary education and gaining the skills needed to work as chefs. Despite receiving the same education as their male counterparts, women are not being hired or promoted to positions such as head chef. See the statistic below for more on this. 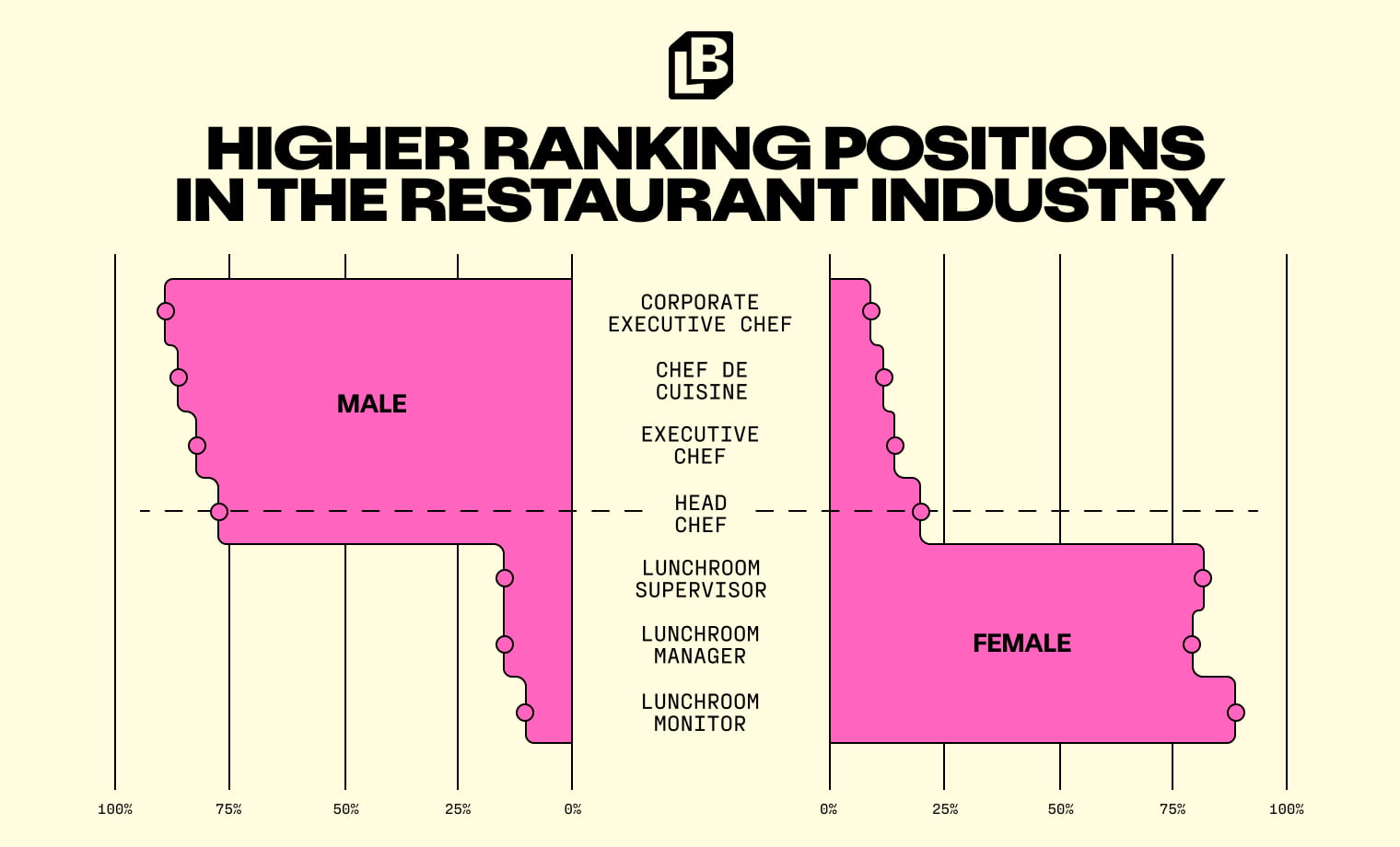 Higher ranking positions in the restaurant industry, such as head chef or executive chef are held by fewer women. Zippia, 2022

About 20 percent of head chef positions are held by women.

Throughout the U.S., there are approximately 112,391 head chefs. About 77 percent of these chefs identify as male, while 20 percent identify as female (3 percent were unknown). At prominent U.S. restaurant groups, women only occupy about 6.3 percent of head chef positions. These positions are the ones that typically receive the most accolades, awards, and of course, highest pay. For positions such as executive chef and corporate executive chef, there are increasingly fewer women that hold these positions. 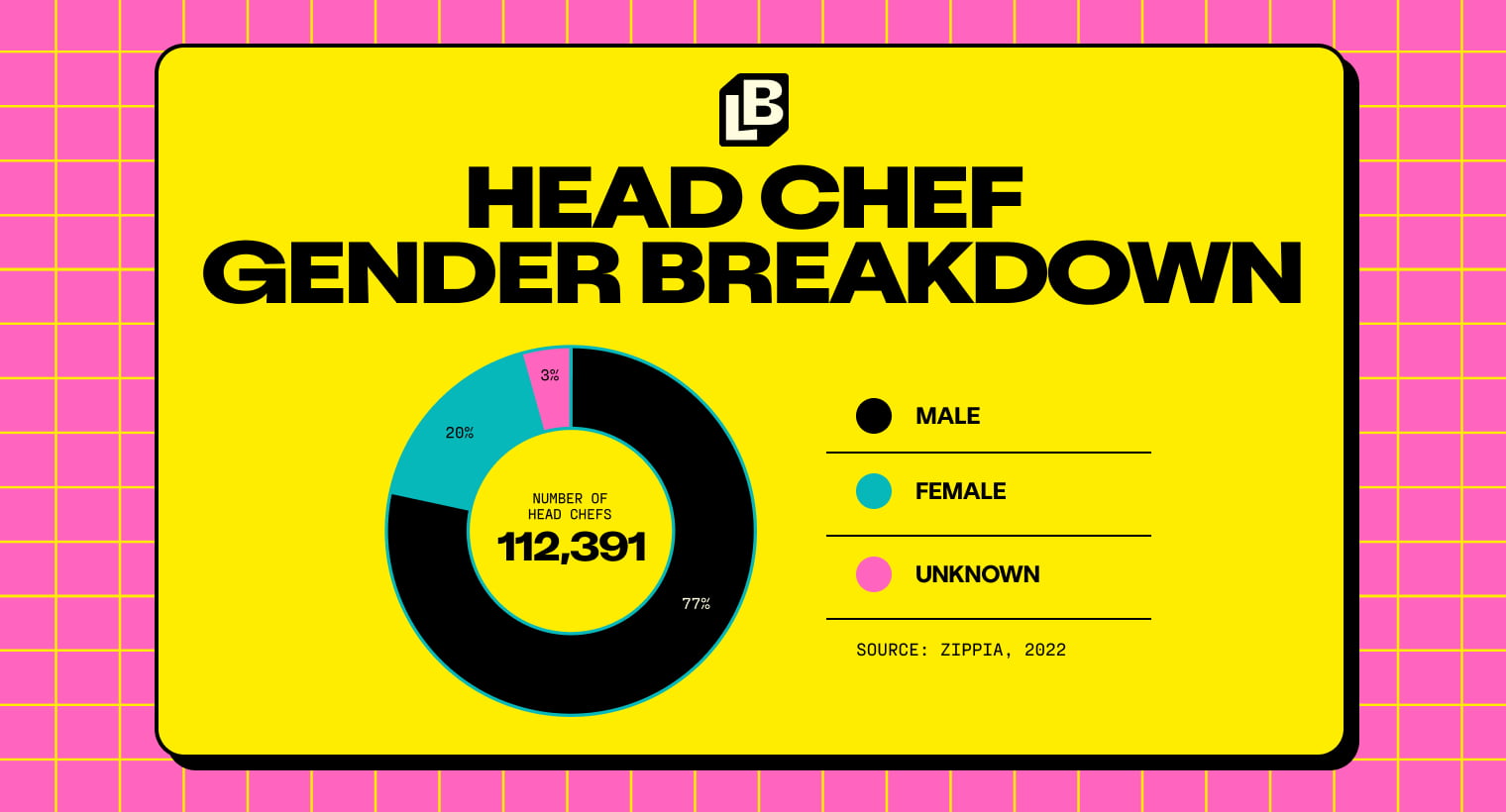 It is important to note that in addition to gender inequality that occurs at the head chef level, there is also a lack of diversity found in this position. About 60 percent of head chefs are white, compared to 17.4 percent Hispanic or Latino, 9.9 percent Black or African American, 8.9 percent Asian, and 0.6 percent American Indian and Alaska Native. Only 8 percent of all head chefs, including both men and women, identify as LGBTQ+. 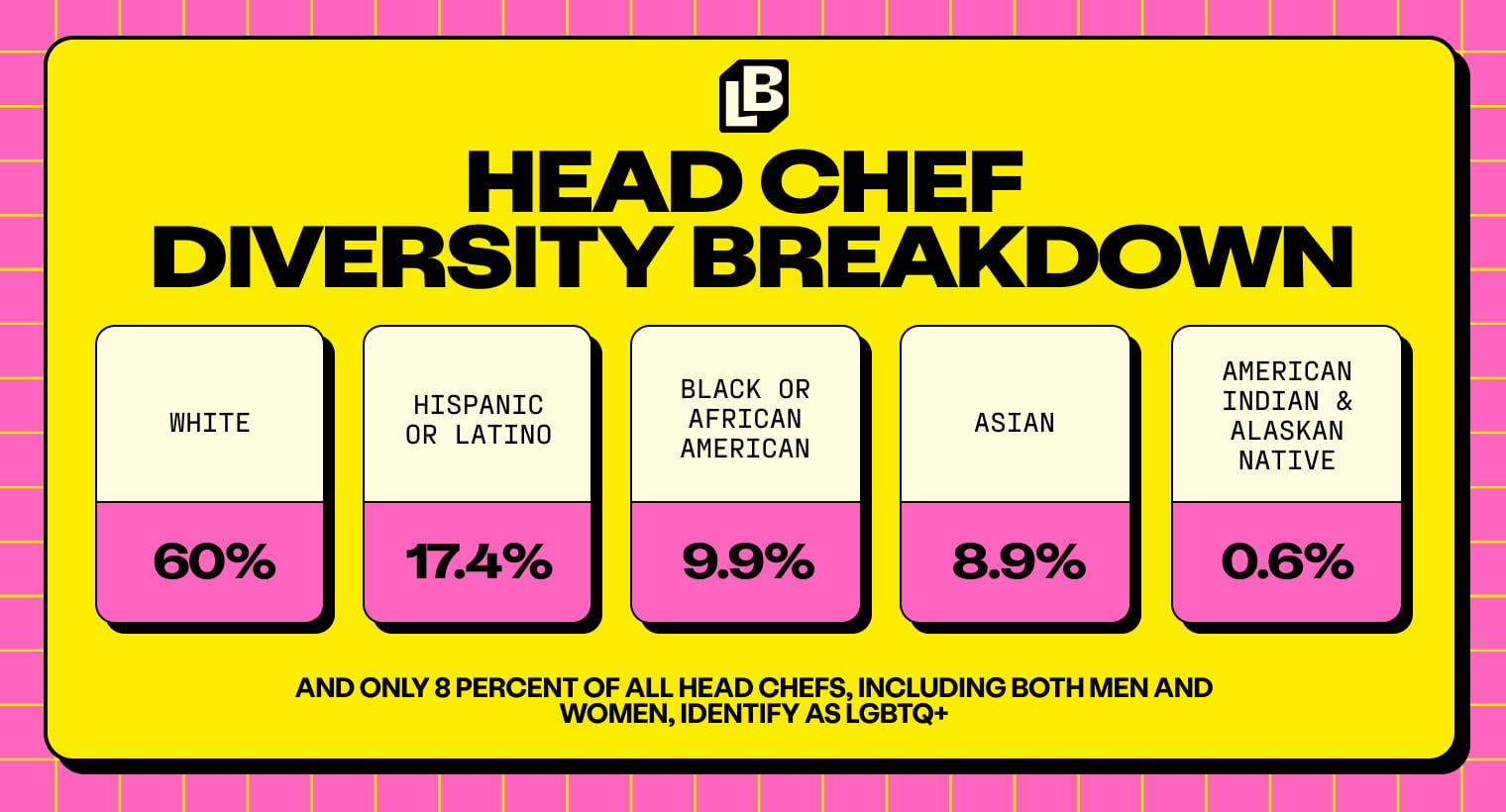 60 percent of women have worked in the restaurant industry.

A high percentage of women, nearly 60 percent, have reported that they worked in the restaurant industry at some point in their lives. This industry often offers an ample amount of entry-level positions such as hostess, server, busser, dishwasher, and bar back. About 71 percent of servers in the U.S. are women. Although women are greatly involved in this space in entry and mid-level positions, they often do not receive promotions for higher-paying and ranking positions.

Female chefs take away a lower base pay.

Half of the restaurants in the U.S. are women-owned.

Now for some good news: The National Restaurant Industry reported that nearly 50 percent of all restaurants are owned or co-owned by women. On top of this about, 45 percent of managers in the restaurant industry are female, which is higher than most other industries.

How Coronavirus impacted women in restaurants

The Coronavirus greatly impacted the restaurant and hospitality industry, but women in this industry were, unfortunately, disproportionately affected. According to a report created by Women in Hospitality Travel Leisure, after the pandemic hit, 65 percent of women had their hours reduced or been furloughed in the sector during the pandemic, compared to 56 percent of men.

Businesses owned by women, people of color, and immigrants have also been disproportionately affected by the COVID-19 pandemic. According to a National Bureau of Economic Research report, there was a 25 percent drop in the number of women business owners in 2020.

Currently, there is a major labor shortage in the restaurant industry due to the lasting effects of the pandemic. Although this may seem like a negative thing at the moment, a major occurrence such as this allows for significant shifts to take place within the industry. With many open positions for chefs, managers, and operators, this is the restaurant industry’s opportunity to hire and promote deserving women to positions of power. Ideally, women will play a crucial role in rebuilding the food and restaurant industry post-pandemic, making it stronger, more diverse, and overall, a better place to build a career.

It is obvious that despite progress made in the past decade, there is still so much room to improve upon how women are treated in the restaurant and foodservice industry. As awareness around gender inequality and lack of diversity in this space has grown, organizations have sprung up to close these gaps and make restaurants a safer and more inclusive space for women. Below are some of the larger, nationwide organizations that exist for the purpose of supporting and connecting women involved in the restaurant industry.

LEE is an acronym for Let’s Empower Employment, and this organization aims to increase equality, diversity, and compassion in the restaurant industry. The LEE Organization offers programs such as “Women and Culinary Spirits”, and has partnered with other organizations such as “Southern Restaurants for Racial Justice”.

Let’s Talk Womxn is a collaboration of women restaurateurs with the goal of building combined economic power. This action-led movement, which was launched in 2020, is nationwide, with hosts from different major cities throughout the U.S. Let’s Talk hosts virtual summits, as well as national and city-based events and meet-ups.

RestaurantHER is an initiative supported by GrubHub that aims to bring women-owned restaurants into the spotlight, while also providing grants and resources to progress female chefs’ culinary careers forward. GrubHub and its other delivery service, Seamless, feature an interactive map where customers can locate and select dining establishments run by women.

This organization provides mental health support for those who work in the restaurant and hospitality industry. Founded by hospitality workers who witnessed firsthand the lack of mental health resources available in the industry, Restaurant After Hours aims to be a voice for those suffering in silence. The organization offers access to resources and a free, virtual support group three days a week.

Also called RE:Her, Regarding Her formed out of the Let’s Talk Women Group. Some of the members that are based in Los Angeles decided to create a localized group to support restaurant industry women in the area, and it now consists of about 80 members. The organization hosts a yearly 10 day festival in Los Angeles, and now Washington D.C,. to highlight and celebrate female chefs.

Resources for women in restaurants

In addition to the above organizations, there are books, documentaries, and other resources that women in the restaurant industry might find helpful.

This film by Joanna James features world-renowned female chefs such as Cat Cora, Dominique Crenn, and Lidia Bastianich, and highlights the dismal lack of leadership roles in restaurants. Women have traditionally held a central role in kitchens, and A Fine Line examines why less than 7 percent of head chefs are women.

This short Youtube documentary by Rayka Zehtabch and KitchenAid shares the story of three women, a butcher, a chef, and a restaurateur, carving out a place for themselves in the male-dominated culinary industry. Karyn Tomlinson, Etana Diaz, and Marielle Fabie, the three featured chefs, worked against bias, sexism, and harassment to make their culinary dreams a reality.

Presented by KitchenAid, the James Beard Foundation Mentorship aims to make mentorship available and visible to communities that have historically struggled to access this support. The program is open to applicants of all backgrounds, and helps ensure that restaurant and food industry professionals have the support and resources they need to thrive. Mentorships are available with head chefs, business owners, executive directors, and public relations specialists.

4. Taking the Heat: Women Chefs and Gender Inequality in the Professional Kitchen

This book, written by Deborah A. Harris and Patti Giuffre, analyzes how despite changes made in the past decade in the restaurant industry, this space is still male-dominated. The world of professional chefs is gendered, the two authors investigate what led to this gender segregation, and the evolution of this profession. Providing over thirty interviews with female chefs, Taking the Heat examines how female chefs feel about their work in relation to men. 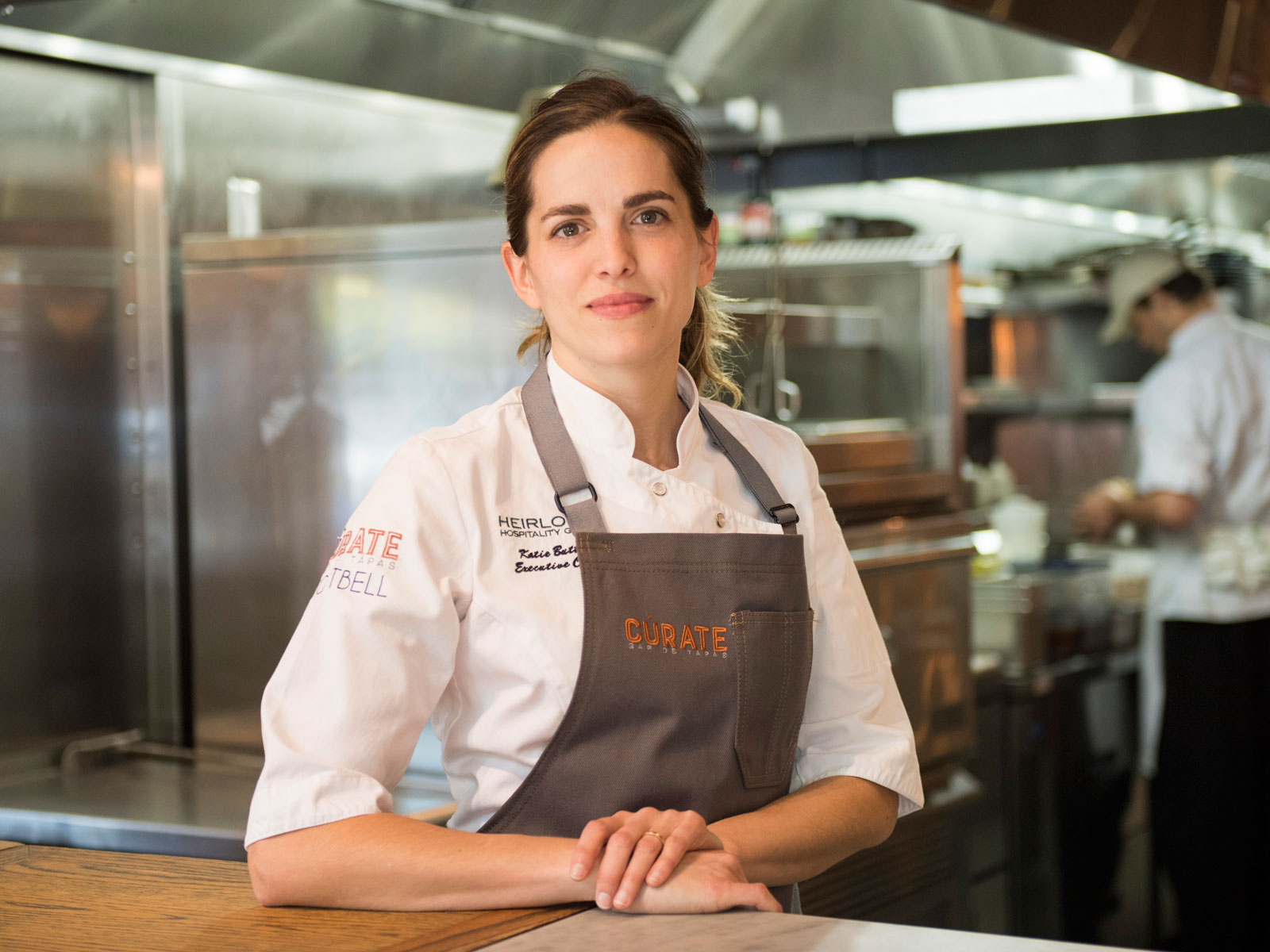 Katie Button, the co-owner and executive chef of Cúrate and Nightbell in Asheville, North Carolina, shared her experience with sexual harassment in the restaurant industry on the Communal Table forum. Source: Communal Table, Evan Sung, 2018

Communal Table is FoodandWine.com’s forum aimed at amplifying first-person voices in the food industry. Launched in November 2021, the goal of this space is to work with leaders to create humane and sustainable workplaces. Restaurant and bar workers and owners are encouraged to write in and share about their experiences, hardships, lessons learned, and ideas for making the restaurant and food industry a better place to work.

Although there have been huge strides in making the restaurant industry a safer and more inclusive space for women and traditionally marginalized groups, this space has a long way to go. Women are head chefs, award winners, and executives at prestigious food and restaurant businesses, but not nearly at the same rate as men. In 2022, women are now equal to men in terms of owning restaurant businesses and attending culinary school, but the pay for female chefs and restaurant workers desperately needs to catch up. Running a restaurant and working in this industry is incredibly challenging, and it is twice as difficult for women who also face bias, discrimination, and harassment. Thanks to awareness around these gender inequality issues, organizations and resources have sprung up for women following their culinary career dreams.